[Technically this ran in the Members’ Area for the week or so the Message Board was down, but since we have received so many emails about the origins of the photo (from the Help Page, if you have not seen it before), we did a quick search — very handy on a members’ side with 20,000+ pages — and pulled the explanation for Dee. By the way, having the Message Board down for less than a week out of 15+ years of being online should not worry you. Of course it irritated the heck out of us. Didn’t sleep a lot that week, as we recall.]

by Just Another Day in Paradise

Many of you seem to have noticed the sudden demise of the Message Board over the last week (which, of course, just serves as a nice way of saying it doesn’t work anymore). Depending on when you discovered this rather irritating side effect of “upgrading” our management system on the server, you may have seen a larger version of this photograph when you tried to pull up the Board. 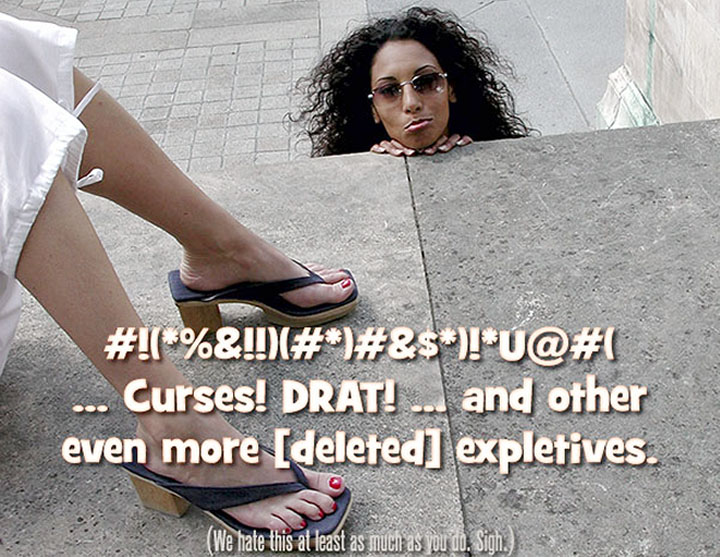 Now I was going to give you a quick explanation of the technical reasons behind this irritation, but in just trying to explain it to D.Minion I noticed a set of fairly web-experienced eyes glazing over. Then she got off on a completely unexpected tangent, which, if you want to know the truth, happens to be a real strong suit of hers.

“Hey!” says she, “I’ve never seen that picture before. Is that all Photoshop? I thought I’d seen all of our pictures of Dee. Whose toes are those? Where are those building? Why have I never seen this picture in our archives? Is it one picture? Why haven’t you shown me this before? …Wow. Nice font. It looks like a cartoon."

And that pretty much sums up a typical conversation with our Dear D.Minion, actually.

So rather than bore you with technical details, I’ll tell you the story of the picture. …