I was in Paris with Devinn Lane, Dee, and Inari Vachs, and we were walking toward the Louvre. Dee and Inari were running ahead like happy school girls, while Devinn and I trailed behind. Devinn noticed that there was a wall (slash) bench coming up, and if she laid down just right it would be a great picture with the most famous view of the Louvre in the background. About that time, Dee turned around and noticed Devinn reclined in the sun, and decided she wanted to join in the fun. She came running back towards us, with Inari quickly trailing, but they had already gone down a stairway you can’t see to the right of this shot. When Dee got close to us, she realized that we were about seven feet above her level, so she couldn’t jump up. Inari bent down to lift her, but Dee could still barely get her head above the wall. As Dee realized this, she made this face, and I took a picture. Because that’s what I do.

Eventually I moved everyone down to a better wall (slash) bench, and got the shot Devinn wanted, and it happened to be low enough that Inari and Dee could participate this time around. Whew. … Um. … Then we all got ice cream and beer and lived happily ever after. The End. 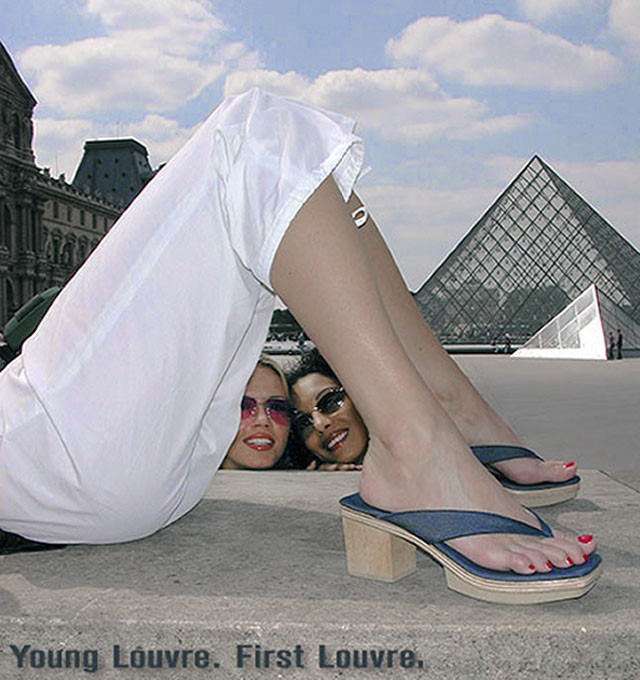 One of these days, we’ll run this set of pictures, I guess. Or maybe we already have. I remember doing a lot of France stories after this particular trip, but I can’t remember if we did this one. I’ll have to ask D.Minion once she finishes trying to find that font I wouldn’t tell her the name of.

(And that pretty much sums up a typical conversation with myself, actually.)

Back to the whole Message Board fiasco, though, I will say here that the last three months prompted a much faster technical ramp up than we’ve ever envisioned (or certainly attempted) before. Our little risqué commune will see some interesting additions over the next few months, but, just so you know, I personally hope we never, ever, ever try to do seven major additions at the same time again. (Did I say EVER?) Even geeks need to sleep some time.